A family legacy, written in ink

“We are Copts, we come from Egypt, and in Egypt there is a tradition of tattooing Christians, and my great, great ancestors were some of those tattooing the Christian Copts,” he told me.

The first evidence of a Christian tattoo tradition traces back to the Holy Land and Egypt as early as the 6th or 7th Century. From there, the tradition spread throughout Eastern Christian communities such as the Ethiopian, Armenian, Syriac and Maronite Churches. To this day, many Coptic Churches require a tattoo of a cross or other proof of Christian faith to enter a church. (Tattoo traditions among groups such as Celtic and Croatian Catholics emerged separately and at a later date.)

With the advent of the Crusades beginning in 1095, the existing practice of tattooing pilgrims to the Holy Land expanded to the European visitors. Numerous accounts dating back to the 1600s describe Christian pilgrims taking part in already long-existing customs of receiving a tattoo upon completing a visit to the Holy City – a custom that survives to this day.

While in the tattoo parlor, I witnessed the Razzouk family help a Roman Catholic bishop from Europe plan a tattoo he hopes to receive once he completes a personal pilgrimage later this year. Only weeks prior, Theophilos, the Coptic Bishop of the Red Sea, came to the Razzouk Family receive a pilgrimage tattoo. Other patrons of the Razzouk family have included Christian leaders of Ethiopia, persecuted Christians, and Christian pilgrims of all denominations from around the globe.

“A lot of them decided to come to the Holy Land as pilgrims themselves and decided to stay,” Wassim said. “For the past 500 years, we’ve been tattooing pilgrims in the Holy Land, and it’s been passed down from father to son.” 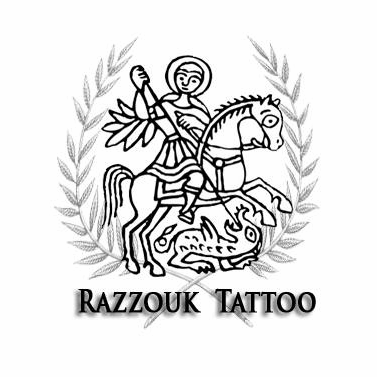